Sitting in a harness, attached to a fabric wing overhead, paragliding is both a recreational as well as a competitive sport. For the launch before the flight, either of the two techniques is used- forward launch and reverse launch. The forward launch requires the glider to run forward, lifting the wing over their head and then taking flight. In the reverse launch, however, the glider simply faces the wind which brings the wing I overhead, launching into flight. Mostly thanks to Bir Billing in Himachal Pradesh, the “second highest paragliding site in the world”, this sport is slowly gaining attention in India.

The 'Then and Now’

Man's thirst to have a taste of life high up above the ground led him to create the aeroplane in 1903 and since then this thirst never quenched. In 1952, a Canadian man named Domina Jalbert patented the first-ever governable gliding parachute and it was in 1954 when Walter Neumark correctly predicted that a time will come where a glider would be able to launch themselves by running over the edge of a cliff. This prediction correctly foresaw paragliding as we know today.

The first thought when someone talks about paragliding in India is perhaps, without a doubt, Bir Billing. But little does anyone know, despite being the second-highest paragliding site in the world, this small town in Himachal Pradesh isn't the only one offering jaw-dropping views from thousands of meters above the ground.

The first thought when someone talks about paragliding in India is perhaps, without a doubt, Bir Billing. But little does anyone know, despite being the second-highest paragliding site in the world, this small town in Himachal Pradesh isn't the only one offering jaw-dropping views from thousands of meters above the ground.

Best Places for Paragliding in India 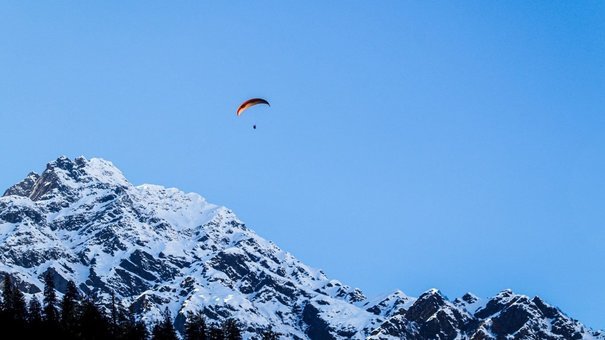 Himachal Pradesh
This small Himachali village tops the list without much surprise. What was once a quiet little village with a number of Buddhist monasteries and mesmerising hiking trails has now become a bustling tourist centre, is one of the most famous paragliding places in India. From tandem joy flights to actual, full-fledged paragliding courses, Bir has it all! The joy flights vary from 15 minutes to even an hour depending on how much you’re willing to pay. Also known for hosting the first-ever world cup, the paragliding in Bir Billing is one of the best found in the country! 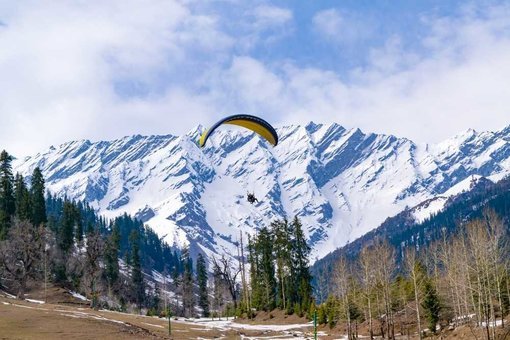 Himachal Pradesh
If you thought your dreams of flying high up above the Himalayas, with an unbeatable view of lush valleys and quaint towns end at Bir, think again! Solang Valley, near Manali in Kullu district of Himachal Pradesh, is yet again a famous tourist spot known for a lot of things, but most importantly its paragliding activities! However, most operators only offer joy rides and the scope for taking up a course for paragliding in Solang Valley are relatively slim. 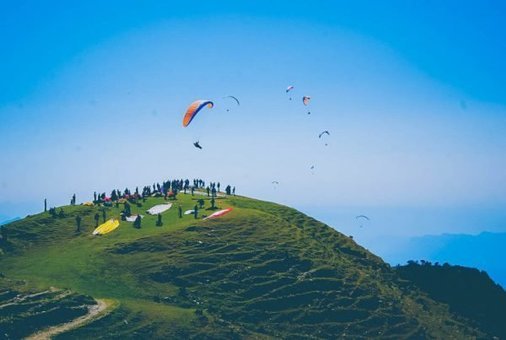 Maharashtra
If you’ve ever wondered the birthplace of paragliding in India, it is this small town in Maharashtra, close to the famous city of Pune. Not a lot of people venture towards Kamshet, but when they do, it is mostly for hanging below a wing and witnessing the stunning Sahyadris in their full might. Paragliding in Kamshet is not only done recreationally but is also the home for a number of famed institutions that take up batches after batches to train curious and enthusiastic minds for this exhilarating sport!

Paragliding is a sport that is largely depended on the weather, especially the course of the winds. Conditions such as heavy snow or rainfall or strong gales of wind make the conditions unsuitable for a pilot to go flying. Therefore there are certain months in the year which are deemed as the best time for paragliding in India. Thus, in India, September to December and February to April is usually considered the best time for paragliding.

The most widely accepted governing body for paragliding around the world is the Association of Paragliding Pilots and Instructors (APPI) based out of Switzerland. This Association is recognized in over 50 countries including India and has over 180 registered schools worldwide. Apart from APPI, there are certain countries that have their own regulating bodies for the sport like the USA, the UK, Germany and Australia. Apart from various levels of education offered by the APPI, they also offer pilot insurance.

The most popular paragliding courses in India include the P1, P2 and P3 levels which essentially cover your beginner, intermediate and advanced levels. With each advancing stage, the technicality and the know-how of the sport increases in difficulty and training. The basic course level goes up till P5 and beyond that, one can learn thermalling, cross country flying, dynamic soaring etc.

Like most adventure sports, paragliding career prospects are also underexplored. What could be better than flying high up with the clouds and fellow winged beings and being paid to do so? As a professionally trained paragliding pilot, the most common paragliding career option is to become a tandem pilot. A tandem pilot is one who assists curious tourists in their joy flights. Apart from that, one can even get into the competitive scene of things like competing in worldwide annual competitions. Two of the most famous annual paragliding events including the Paragliding World Cup and the RedBull X-Alps.

Did we heighten your curiosity for reaching new heights yet? If yes, what’re you waiting for? Book your adrenaline pumping, jaw-dropping adventure today!